When you drink from the well remember the well digger.

Faces of well-known and well-loved Perry-area men and women can be found on the west side of Soumas Court.  This wall recognizes those who have gone before and stand as witnesses to our care of the community and those who set the course both in the present and in the future.  The ceramic plaques of various sizes and shapes were designed by Dahlquist Clayworks.
Celeste Council – 50 years of 5 cent popcorn
1882-1969

John’s mother’s maiden name was Evans and the family was from Wales; his father was from England.   John’s wife Edith was from Madrid, Iowa and her family, the Goodman’s or (Gudmmunsen) were from Hoganas, Sweden.  John and Edie had one son, J.D.; he taught high school for four years before going the PGA.  J.D.’s family includes three daughters, all involved in education, and four grand children.

In the Lucas mining years, John’s father was president of the local mining union, while the recording secretary was John L. Lewis.  John’s mother taught in the school at Lucas while Mrs. Lewis taught there too.  His mother taught in Lucas, IA after she had graduated from school where she had taken Normal Training.  She taught the first four grades until she married Henry Turner.

After two years at Graceland College, where he received his A.A., John applied at several schools.  These were during the Depression Days and teachers were not leaving their jobs; so he worked in a coal mine at Moran for two years. He was then hired to teach in a rural school between Woodward and Moran; he had 29 plus students from 1st through 8th grade and stayed there for 3 years. His salary at that time was $55 per month.  He always maintained that was when we earned to teach.  After rural school he was hired at Gardiner School east of Perry on highway 169, where he taught 7th and 8th grades for seven years.

John was hired by Perry Schools (Junior High) where he taught social studies and was a junior high coach.  He taught in Perry for 33 years.  He spent 44 years in Dallas County; he taught 44 years within a radius of 8 miles.  John continued his education by attending Saturday classes and summer school, eventually earning his B.A. and M.A. from Drake University.
Fred Melick – Dedicated Post Office Employee; Walked 21 miles per day; local Philanthropist
1885-1972 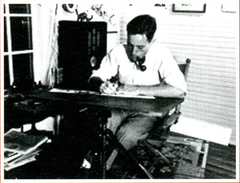