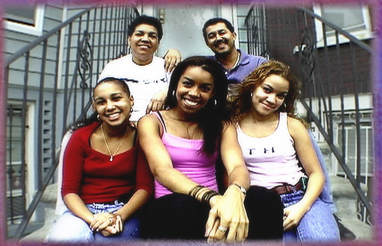 Clockwise, from top left: Sandra Ortiz, Bautista Ortiz, Aida Ortiz, Monica Ortiz Rossi, Mayra Ortiz; Photo by Aaron Matthews
Today, as well as throughout the history of immigration to this country, family considerations play a central role in the decision whether, when and how to leave a home country and come to the United States.  Marriage prospects in the homeland, the financial or medical needs of wives, husbands, mothers, fathers, and children, and the desire to gain more freedom, economic opportunity or political stability for one’s children can be major motivators in making what is often the wrenching choice to leave the traditions and culture the migrant has known his or her entire life for an unknown one.
​
Contemporary scholars generally agree that strong family and community ties among immigrants are an important component of successful migration. Often, families pay the costs of migrants’ travel. Strong ties help organize the process of settling into the new country by creating “migration chains” in which a father may follow a friend or a son, or two brothers travel together, or cousins live together with others from the home country before sending for wives, children or parents. On arrival in the U.S., immigrants are often met, housed and fed by kin who also assist them with job searches or provide advice about schools, clothing, places of worship, and community services. 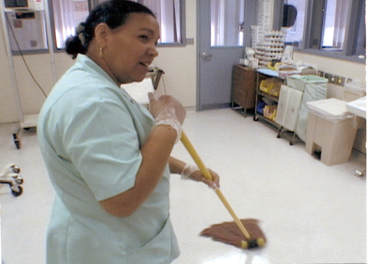 Sandra Ortiz, photo by Aaron Matthews
While family is central to the impetus and success of immigration, the process of migration has both separated and united families. In the nineteenth century, successful farming often depended on the labor of entire families – parents and children. Unmarried Swedish men in the rural Midwest, much like other single men, rather quickly sought wives from their home villages, or among Swedish women working as domestic servants in nearby, more urban ethnic enclaves. Conversely, with the rise of industrialization, American labor markets needed individual workers who were untrammeled by family ties – men for mining, railroad building and construction, and women in domestic service or the “female” industries of garment-making, textiles, or today, computer assembly. Neither immigrant Chinese railroad laborers nor Irish female domestic servants could easily combine work with settled family life, while employment in factories in large industrial cities facilitated the employment of many members of an immigrant family.

In the past, depending on the needs of the American economy, married men and young and unmarried sons or daughters often were the first settlers in the new land. The migration of single and married men traveling without families was most common among the Chinese and southern and southeastern Europeans. Unmarried daughters from Ireland and the Nordic countries more often traveled alone or in groups of unmarried siblings. In the Caribbean, however, where grandmothers often raised their children while daughters worked, mothers left first, a pattern that became more general after 1970. Women’s presence among immigrants increased in the aftermath of immigration restriction in the 1920s and gender-balanced migrations have been the norm since that time, in part because the postwar UNHCR (the United Nation’s refugee agency) began to resettle growing numbers of refugees in gender-balanced family groups. In today’s world, migrants who seek asylum individually or who travel to American borders without documents face high risks – including dependence on traffickers and the likelihood of refused entry or deportation – and are more likely to be men traveling without their families.

U.S. immigration policy has traditionally favored families. For almost 100 years, the United States has preferred to admit immigrants who are joining an already settled family. This pattern is called chain migration and though some, including President Trump, have recently criticized it in favor of an employment-based admissions policy, most Americans have been outspoken in their support of family reunification as an element of American immigration policy. Even a century ago, laws intended to exclude particular groups by race – the Chinese during the 1880s, the Japanese affected by the 1907 Gentlemen’s Agreement, and southern and eastern European laborers under the restrictionary laws of the 1920s – often made allowances for spouses, children and sometimes parents or siblings to enter with their relatives’ sponsorship. In recent decades, two-thirds of immigrants have entered America with family-based visas. Immigrants’ desire to sponsor kin and to travel to visit them even creates incentives to acquire American citizenship. 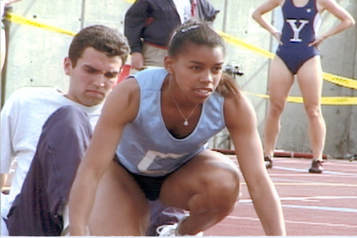 Monica Ortiz Rossi, photo by Aaron Matthews
The family as the crucible for the process of change and assimilation into American culture has been at the heart of scholarly studies of American immigration. Historian Oscar Handlin contrasted the alienation of the “first generation” of immigrants – the newcomers themselves – to the more comfortable integration of their children, the American-born “second generation.” Scholars continue to debate whether the “third generation” grandchildren of the migrants are thoroughly Americanized, or instead become interested in their foreign “roots.” Scholars also discuss how an immigrant “1.5 generation” – those who arrived with parents as small children – may share their parents’ alien status but duplicate their second-generation siblings’ swifter adaptation.

The family has traditionally been the center, and cause, of economic success in the new country. In the nineteenth and early twentieth centuries, children worked from an early age in order to help the family achieve financial stability. At that time, an important symbol of family solidarity was the working child who turned over her weekly earnings to her parents. Men, women and children also labored together in the small family-run grocery stores and restaurants that were found in every neighborhood where Chinese, German, Japanese, Mexican, or Italian immigrants clustered. The immigrant family household often became a workplace, especially when women took in “piece work,” finishing clothing manufactured in New York’s garment industry sweatshops.  Immigrant women also cooked and cleaned for male “boarders” to lift family income. In the twentieth and twenty-first centuries, as more wives and mothers sought waged work, multi-generational families in the same home or neighborhood who could share childcare for their working mothers had an advantage, and encouraged kin to remain close together in tight-knit neighborhoods. In the past as well as today, a common goal of family cooperation has been the purchase of a house.

In a climate in which new immigrants can face discrimination, xenophobia, and racism in the workplace, school and neighborhood, the immigrant family can serve the important emotional function of a “haven in a heartless world.” For adult immigrants, family, community and religious institutions or clubs provide sites of linguistic comfort, places where they can feel “at home,” and where a familiar language, food and customs remain insulated from the pressures of acculturation.

Often, it is the immigrant mother who takes on the role of teaching children the language and customs of their country of origin. Strong ethnic communities can reinforce family efforts to teach American-born and 1.5 generation children the linguistic skills and cultural fluency that connect them to the family’s past and to its web of homeland social relations. Natural tensions between the traditional cultures of the homeland and American society’s greater tolerance of individualism can create conflicts within families around discussion of children’s sexuality and dating habits, and around parents’ expectations that they will make decisions for the entire family, without taking into account the new generations’ more Americanized habits. These often take place around choices relating to children’s education, place of residence, consumer expenditures, and leisure activities.

Adapting to a new life in the United States inevitably brings change to immigrant families and communities, often in the form of generational disagreements between children and parents. The role of the immigrant child as translator for immigrant parents threatens parental authority when they need assistance or information from providers of health, education and welfare. But children citizens also can face extraordinarily difficult lives when their alien parents are subject to deportation – as so many undocumented parents currently are. The often held belief that first generation families are “strong” in contrast to “weak” American families, can produce especially powerful scrutiny of daughters’ choices, as a girl’s greater autonomy or enthusiasm for American individualism can threaten her willingness as a future mother to carry on the transmission of homeland language and customs. For GLBTQ individuals hoping to escape homeland stigmatization, family scrutiny can foster marginalization and enhance departure into culturally diverse or American queer, gay and lesbian communities.

Despite the centrality of family as the site of cultural change, few immigrants completely sever family and community ties to the home country. The film My American Girls portrays the varied responses of three second-generation daughters to visits to their parents’ home country, and to their parents’ dreams of returning there. While facilitated by relatively inexpensive 21st century airfares, these ‘transnational ties’ are not new. A century ago, the new marvel of steamship travel facilitated immigrants’ visits back to home countries like Greece, Mexico, China, Italy, or Norway. Today the question is only whether or not second and third generation immigrants will continue to maintain their homeland connections into future generations.