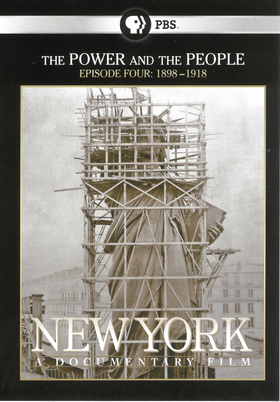 Parts of New York City in the late 19th and early 20th centuries were a boiling cauldron of new immigrants from Eastern and Southern Europe and the ethnic communities they built there: the Lower East Side, Little Germany, Little Italy, Hell’s Kitchen. Through literature, film, books, television, and public celebrations, the American popular imagination has focused on this New York City story as representative of the larger story of American immigration. It was a time when massive steam ships, operated by globally powerful companies, helped bring over 27 million Europeans to the United States, with New York City as a major port  of entry and epicenter for an unprecedented influx of immigrants.

The history and drama of immigration to the United States, of course, extends further back in time than the 1880s and covers more of the United States than New York City. Most of the millions of immigrants from this century of mass migration – even if they landed at Ellis Island, which opened in 1892 – moved on to the Midwest to big and small industrial cities and mining regions. Yet immigration to New York City during this period forms a major part of America’s immigration story and provides an opportunity to both examine this extraordinary time, and also to explore our own notions of what it means to be an immigrant, and to place that understanding within the wider history of immigration.

America’s economic growth in the 19th century was fueled in large part by immigration from Europe, primarily from the British Isles and various German speaking regions of Central Europe. By the beginning of the period known as the “Century of Immigration” (1820 – 1924), voluntary migration transformed immigration into a major and defining aspect of American life. The opening of the Erie Canal in 1825 made it possible to tap the vast resources of the Middle West and beyond. Improvements in sail travel and such innovations as the laying of the transatlantic telegraph cable and the invention and development of steam transportation all enabled more and more immigrants to come to the United States to fill the constant need for labor, spurred by the territorial expansion of the nation and the handsome profits to be derived for businesses from the lumber, minerals, and agricultural bounty of the continent.  Immigrants came to the United States from regions undergoing economic modernization, as they experienced soaring birth rates and new farming and manufacturing processes which made their labor at home redundant. 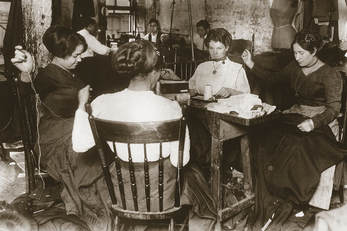 Immigrants working in the garment industry in New York. Photo credit, Culver Pictures
In the period from the 1820s through the 1860s most of the immigrants to the U.S. came from northern and central Europe,  including: Ireland, both before, during, and after the Great Famine of the 1840s; German-speakers from the states that in 1871 would become Germany; Czech-speakers from the Austro-Hungarian Empire; and from Scandinavia. But by the 1860s the source of the migration shifted gradually eastward and southward. Increasingly by the 1880s, masses of immigrants came from southern Italy, the eastern parts of the Austro-Hungarian Empire (the area that would become Poland), and the Czarist Empire. They also came from parts of the Ottoman Empire, Greeks among them.

This new flood of immigrants came for a multitude of reasons. Local upheavals, wars, regime changes, and the rise of nationalism all played a part. But mostly, the same forces of social and economic change at work in the earlier part of the nineteenth century snowballed: the penetration of the railroad into the hinterlands, an increasing birth rate, the consolidation of agriculture and the decline of home manufacturing in the face of rising industrialization, all upended conventional ways of making a living for millions of Europeans. Essentially, too many people had to compete for increasingly limited work or land. 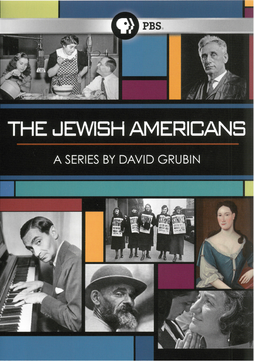 Courtesy of David Grubin Productions
In this later migration, immigrants tended to be mostly Catholic and Jewish, differing as such from the earlier immigrants among whom (except for Irish Catholics) Protestants had predominated. Notably these immigrants were white and, as such, capable of naturalization and acquisition of citizenship as mandated by the 1790 Naturalization Act which limited this privilege to free white men.

At the beginning of the 19th century, no American state – and certainly not the federal government – had enacted laws to regulate or restrict immigration. If you could get to the U.S., you became an American. Over the course of the 19th century, however, states like New York and Massachusetts began to impose some kind of immigration control, as they worried that too many indigent women and men would swamp port cities like New York and Boston. By the 1870s the federal government took over supervision of the process. From the 1880s on, including the 1882 Chinese Exclusion Act and culminating in 1924 in the National Origins Act, restrictions began to creep in, complicating what had been a simple, non-bureaucratically regulated matter of migrating to America.

Throughout this period, Americans were divided over the benefits and liabilities of immigration. While they recognized the need for immigrant labor, many lamented the particular immigrants arriving. Whether Irish, Italian, Jewish, Polish, Greek, German, or other ethnicities, some Americans found fault with them. Until the end of the nineteenth century, however, American public opinion held that immigrants could improve themselves through education, exposure to American standards of behavior, and even conversion to Protestantism. By the end of the century though, increasing numbers of Americans came to think that the “new immigrants,” a phrase used at the time, took jobs away from Americans, committed criminal acts, drank too much, refused to learn English and had no interest in becoming American. Scientific opinion of the time, influenced by social Darwinism, emphasized race and asserted that various immigrant populations were innately criminal, violent, stupid, or unable to assimilate into American culture. 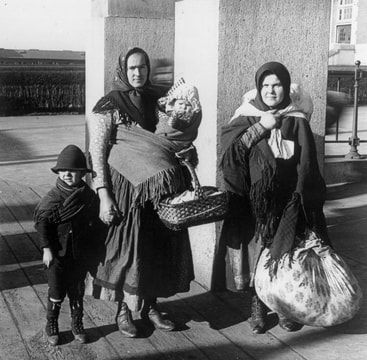 Newly arrived immigrants. Photo credit: NPS/Statue of Liberty NM.
This century of immigration radically transformed American society, adding 40 million immigrants to the population. Immigrants made possible the development of the American economy, providing the muscle power for the industrial, transportation, and agricultural revolutions which changed the United States into the most dynamic economy in the world. Immigrants felled the trees, dug the mines, laid the railroad tracks, and churned out the factory goods which powered American productivity. They provided much of the agricultural labor as well, and their muscle-power reshaped urban and rural life across the country, in every region. Without immigrants there would have been no railroad system, no coal mining, no steel and auto-making industries. Immigrants excavated American cities to build subways and erect skyscrapers and loaded and unloaded the cargo ships which took American-made goods to customers around the world. Beyond their labor, immigrants not only diversified the nation’s religious profile and forced America to live up to its First Amendment principles of separation of church and state, but they made being of foreign birth and foreign parentage the norm, particularly in American cities. The immigrants, each group in their own way, challenged the conventional understanding of America as the domain of a Protestant, English-stock founding class, setting the stage for the complicated process of defining citizenship in the 19th century that contributed to the eruption of the Civil War.

Some Americans fretted over the continuous immigration and sought to limit the influx of foreigners, particularly from the 1890s on. Nativists – opponents of immigration – began to distinguish between “old immigrants” who had come in the first part of the nineteenth century and “new immigrants,” the far greater number who arrived in the latter part of the century and the early twentieth.  “Old immigrants,” nativists claimed, had come in search of freedom and tended to disperse into the countryside, going into farming and blending easily into American life. “New immigrants,” their critics declaimed, came for “base’’ economic reasons, clung to their back-home cultures, settled in cities, and had not, nor would ever, assimilate and become English-speaking loyal Americans. These claims belied any historic reality, since newer immigrants came for the same reasons as older ones, and the older ones had been just as alien and despised as the more recent. The call for restriction instead revealed the fear and prejudices of many Americans.
Despite these sentiments, the immigrants, by their actions and those of their descendants, proved that America derived strength from its diversity.  The immigrants and their children, rather than harming American society as nativists feared, demonstrated a cultural flexibility, as over time they both embraced their new nation and its symbols and also remained committed to the traditions from which they had come. Their sons served in the American military when called upon, with World War I a particularly powerful example. Their daughters became teachers, nurses, social workers and librarians, offering services to all Americans. They learned English, entered American politics and served on the local, state and national levels. They helped create an American vernacular culture, producing music, art, literature, theater and movies, which both reflected their own immigrant experiences and highlighted American themes.  Their foods became American foods and even if Americans did not realize the origins, every time they bit into a hotdog – originally a frankfurter named for the city of Frankfurt – or a slice of pizza, an egg roll or a bagel, they reaped the benefits of immigration. 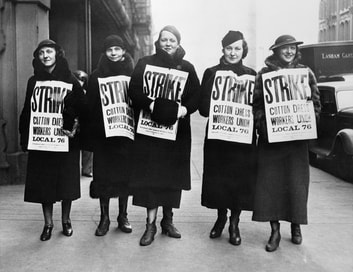 Unionized garment workers on strike. Photo credit, Corbis
The economic system of the time left new settlers exposed to exploitation by unscrupulous landlords and employers, and weak labor unions, which had no support from the government, did relatively little to aid them. Immigrants also had to go through the process of building communities in the United States, including creating their own religious, fraternal, political, and cultural institutions in order to meet their needs. They had to figure out how to navigate the economic system and provide cushions for themselves against hard times.

The communities immigrants created, regardless of where they had come from and independent of where they settled in America, resembled the villages, towns, and regions they had left and yet also represented innovation based on American realities. Sometimes these places were called “Little Italy,” or “Pole Town” or “Little Sweden,” or “the Hebrew Quarter.” Wherever immigrants settled they clustered with others who came from the same places they had, who spoke the same language and subscribed to the same customs. Nearly all immigrant parents faced a cultural chasm between their experience and that of their American-born and raised children who functioned in a more diverse and complex society. Events like World Wars I and II and their mass conscription of young men, meant that the sons of immigrants who may have grown up in relatively insular ethnic communities found themselves thrown together with others of different backgrounds. Similarly, American popular culture, particularly the movies and radio, brought the larger society into the lives of the immigrants, further complicating their family and community coherence.

The Century of Immigration in many ways resembles immigration of the late twentieth century and the early twenty-first of today, and not simply in terms of numbers and proportion.  As in the past, immigrants today represent a selective group from among their cohorts back home. Regardless of where they originate, they come to America eager to work. Their children, like those who immigrated a century earlier, learn English, master the intricacies of the culture, and articulate complicated identities as Americans from somewhere else, which they do not see as conflicting with each other. What separates this new wave of immigration from the massive one which came before, however, is that today’s immigrants must navigate a complicated system of immigration law which those who arrived earlier did not. They also confront a public conflicted about the influx of millions without documentation and legal right to be in the United States. But perhaps more importantly, they arrive more skilled and educated than the immigrants of the previous century, and they function in a world of high-speed transportation and communication technology which has revolutionized the lives of all Americans.